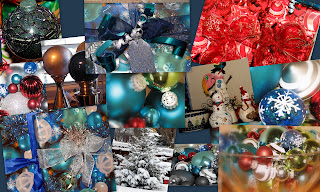 Don't Get Me Started

I'm not particularly a parent of the "let them suck it up and deal" variety. I hate it when I can't make everything "just right" for my kids. They have plenty of things to deal with at school (Middle School and High School drama anyone??) that I can not help with, so when there are things I can do to make their lives easier, I do it. (I do this for hubby, friends, family, etc. when I can too, it's just how lovely I really am.. ha!)

In the last few months Miss 17 has been dealing with different swim team drama. She is a captain this year, there is a new head coach, things aren't well organized, the list is long, I won't bore you. Suffice it to say I have been doing many, many things to help the coach and my daughter keep the team going forward in an organized manner. It's been a strenuous year for me and I'm not even swimming.
The State Meet came and went, Miss 17 did well, not as well as she would have liked since her heart chose right then to act up, but she was brave and pushed through her pain and dealt with it. Me, I was a nervous wreck, but that's another story.
In the end , because we just want it over with, I am now having to deal with the end of the season banquet planning, balloting for team awards, and all that goes with end of the year gift, plaques and so forth. I have secured the location, planned the food, created the ballots for awards, sent out emails to parents, sent out notes to team mates, counted ballots with another mother and done all the things needed to get this banquet (and this stressful season) over with.
In the meantime Miss 17 has to deal with the wrath of her team mates over silly things. Ballots were due on November 22. I collected them from the schools (3 different schools!) on November 23rd, just to give the girls a little extra time. I waited an entire week to count them so if there were any late comers I could get theirs too. But at that point we could wait no longer and another swim mom helped me count them and we called them in to get names put on the plaques at the engraver. Fast forward a few days and now Miss 17 is getting chewed out by the girls because they can no longer turn in their ballots. It frustrates the begeeberz out of me because I could not have made the process any more simple. (I couldn't have... the coach could have if she would have gotten it together enough to do the balloting AT THE POOL when all the girls were RIGHT THERE! Again, another story....) If I could have the girls chew me out instead, I would, it's not Miss 17's fault that this season was an unorganized mess, and I HATE that she takes the blame for any of it. I have worked hard to prevent the messes that occur if no one takes charge and gets things done. I have gone way above and beyond the call of duty for a mother, and yet it isn't enough that I have been able to make it "just right" for Miss 17. Things that aren't her fault, are getting placed right on her shoulders, things the coach should have done she's getting the fall out for. How I wish I could make it all better and this season could have been the perfect, amazing, exciting and fun season that she had dreamed of for so long. But I can't make it all better, no matter how much I tried. Does anyone have one of those time changing things that Hermoine Granger has? I'd like to borrow it, please. 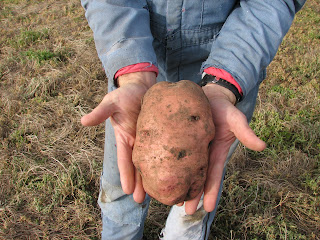 Potato picking time! Here's one of the giants of the year. It makes Hubby's hands look small, doesn't it? His hands are definitely not small, though. It's all an illusion! 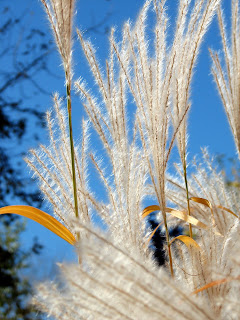 We are feeling a little fuzzy around the edges at our house this week. Homecoming always becomes a torture with both girls in band, swimming and all the other chaos that comes with high school and homecoming. Early morning swim practices, think 5:30 a.m., early morning band practices, late nights float building, homework and the added workouts of "peak week" for the swim season. Today is the homecoming game, pep band, the parade, homecoming dance, etc. I'm not sure I was ever quite as involved as my kids have been, but they all tend to go all out this week.
It has however come at a cost for Miss 17. She spent the week with chest tightness, or as she calls it "a headache in my chest" surrounding her heart. She's had some mild dizziness and tiredness. Is this surprising, no, I remember this happening to her before. Is it concerning? Yes, a bit. We have scheduled a doctor's appointment for early next week, and her coach and I decided she won't be attending the swim meet this weekend. This despite her protests and uncontrollable sobbing. She's not crying because she's so anxious to swim, although she is anxious to swim and do well, she's crying because she feels such an obligation to her team mates and her coaches. She's worn herself down to the point that her body is protesting. Her SVT allows her to go so far and then shuts her down. We are working on teaching her when to listen to her body and just say enough is enough I need a break. Her team mates are disappointed she won't be there to lead their cheers, to swim on their relays and to be the positive support system they all expect from her. She needs to work on de-fuzzing her edges so that next week, and the following weeks, she can go back to being herself.

Mama Bear Mama Bear What Do You See? 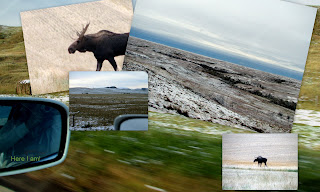 Here's what I saw on my trip south yesterday. Yes, that's snow. There were places that had 4 inches of it on the ground. We were lucky, no snow, but 23 degrees for the overnight low. Yuck! It's not even officially fall yet. 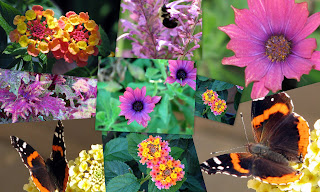 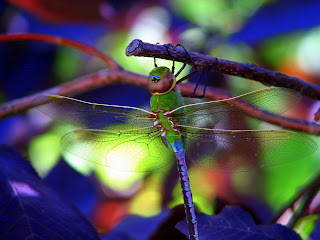 Here is a regular visitor to my yard this fall. Along with an entire hive of bees who seem to love my agastache. But that's ok, they are actually entertaining to watch, especially when a hummingbird shows up. I had no idea they were mortal enemies! 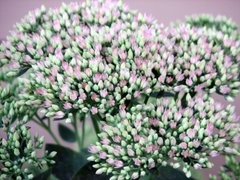